October 20, 2018 and June 11, 2019
Gypsy whelped two litters proving to be not only a great mother but a very worthy dam.  Both litters were consistent in quality and type.
Gypsy's strengths were passed to her offspring while allowing the strengths and characteristics of the chosen stud dogs to come through in the puppies.  Improving on our foundation with both litters, while building strong quality pedigrees to carry on with for future generations.

﻿HUB City Kennel Club All Breed Show, May 1st thru 3rd, 2015  Saskatoon, Saskatchewan
This was Gypsy's first show just after turning 6 months the Tuesday prior and she made me very proud.  Each of the three days Gypsy won RWB (reserve winners bitch) and BPIB (best puppy in breed) with competition.  I had to giggle when a judge on his first walk down the line up of dogs, stepped in front of Gypsy, looked at her and said "WOW".

Saskatoon Working and Herding Dog Association Working and Herding Specialty May 2, 2015
Gypsy on her second day of showing, after going in the ring that morning for the all breed show, puppy group and a sweepstakes class, despite being a tired puppy entered the ring that afternoon for the Working and Herding specialty.  After 5 separate times in the ring for the specialty Gypsy and I were awarded WB (winners bitch) and BOW (best of winners), BPIG (best puppy in the working group) and BPISS (best puppy in the specialty show) by Judge Corinne Walker who was an absolute pleasure to show to, win or lose.
I was very proud of how Gypsy showed for me.  There was nothing like nailing the free stack to hear the cheers and support of friends ringside.  There were many smiles, hugs and happy tears as we were supported by all the friends who shared in our wins that afternoon.  A first for me that I shall never forget.

On Friday May 5th Gypsy earned another two points going BOW (Best of Winners).
Later that day Gypsy was given a Puppy Group Third by Judge Nancy Tibben, who was very complimentary of my young girl.

Monday May 8th, Gypsy went WB (Winners Bitch) for one more point, Judge Susan Ross Godek.
The judge gave me several compliments that day, including in the Puppy Group ring where Mrs. Godek indicated that she wished she had one more ribbon to place Gypsy in her final lineup and that she would love to see Gypsy when mature.

Gypsy finished the weekend with another 3 points, including a two point win.
Gypsy is now halfway to her CKC Championship at 7 months of age in two weekends of showing.

Kamloops, BC, September 2nd thru 4th, 2016
On Friday Gypsy goes BOB and is now over halfway to earning her GCH with a breed win.  I am hoping we can earn the remaining points she needs this fall.
Red Deer and District Kennel Club, November 4th, 2016
Gypsy was awarded select bitch to finish earning her Canadian Grand Championship.  Thank you to judge Cheryl Paterson.

Judge Cheryl Paterson pulled Gypsy along with another lovely bitch for careful consideration for the breed win.  The breed win was given to the other bitch whom Cheryl also awarded RBIS that day.  It was a compliment after the other bitch was awarded a RBIS by Cheryl to know the judge had considered both of our girls so carefully earlier that day before making her choice.
Gypsy is now a Canadian Grand Champion!

August 4, 2018 - Great Dane Club of Canada WD National Specialty
Gypsy was awarded BOS (Best of Opposite Sex) and Best Bred By Exhibitor under the respected breeder judge Mimi Tannehill-Kim from a lovely large line up of Great Danes.  I am extremely proud of my Gypsy, how well she has matured and shows for me.
Gypsy also received a lovely qualifying score of 96 out of 100 in Rally Novice the evening of August 3, 2018.  She would have beat her mother Gracie out for high in trial had I not messed up on sign.

August 2021 - GDCC National Specialty - Breeder Judge Allison Jones
Gypsy along with her son Chesney were awarded Best Brace in Specialty.  When Chesney was born with markings almost identical to his mama Gypsy I said one day I would show them as a brace.  They did not disappoint me, with only few training sessions beforehand, Chesney intact and Gypsy in standing season, both dogs preformed together beautifully.

June 4, 2022 - NACA Dog Show, Edmonton, Alberta
Gypsy went Best Veteran in Group and got to play in the Best Veteran in Show ring, a first for both of us.  Judge Susan Quesnel thanked me for showing Gypsy to her and commented that she could not believe her movement and soundness, especially being a veteran.
Gypsy has not slowed down yet and still remains very active, spry and sound.

June 5, 2022 - Great Dane Club of Canada WD Regional Specialty - Breeder Judge Nancy Simmons
Gypsy at a few months shy of 8 years was awarded Best Veteran in Specialty (BVISS).  Gypsy was then awarded with the only Award of Merit (AOM) from the veterans class.  This is an honor that made me extremely proud as Gypsy's breeder. 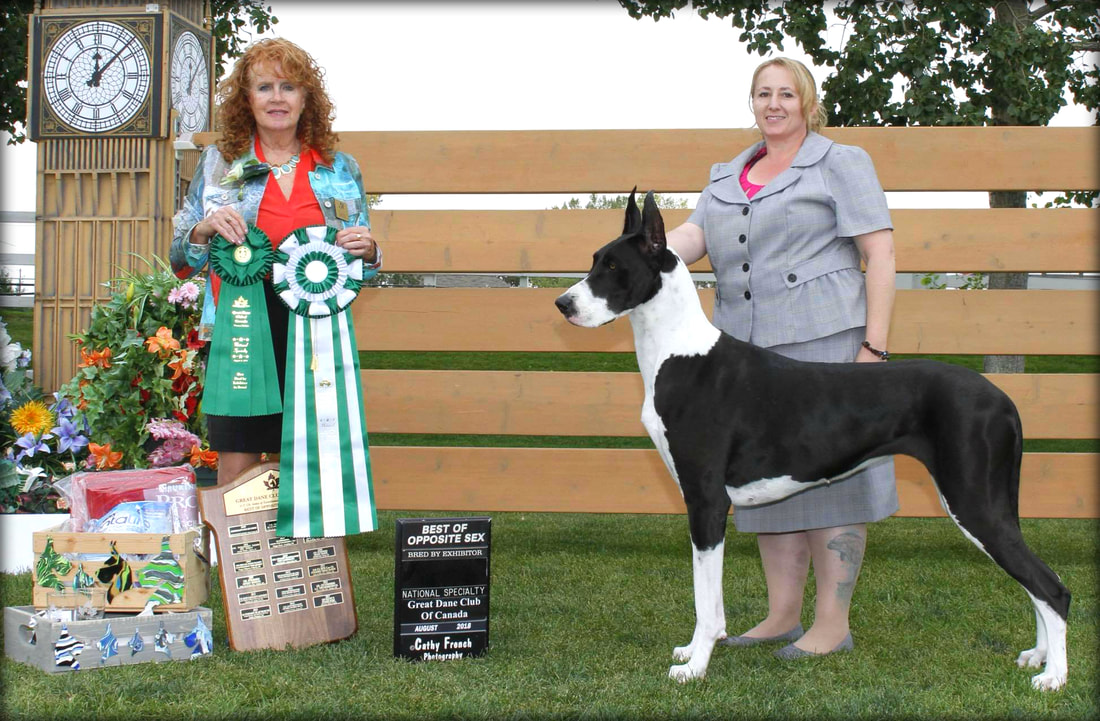 Above and below - Gypsy's first weekend out as a special a few months shy of eight years earning BVIG at the All Breed NACA show and BVISS and the only AOM in the GDCC WD Regional specialty.  This girl is still very sound, floats effortlessly when moving and remembers how to show.
Photos above taken by Niome Dubois of Photos by Niome and Lisa Wysminity of Jumpstart Photography. 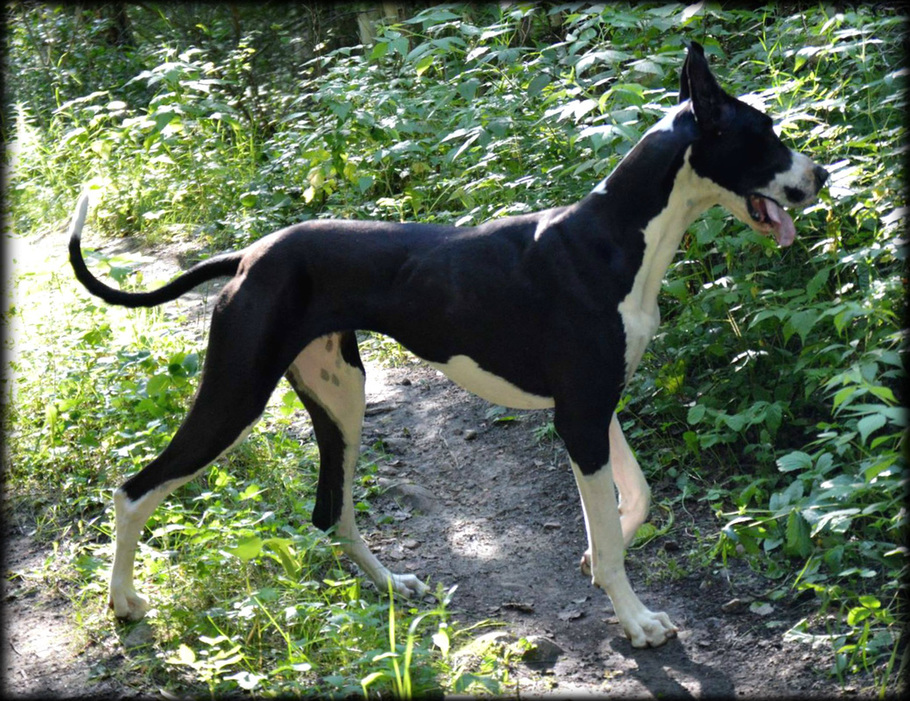 Gypsy 3 months old below, out for a walk on a warm winter day.