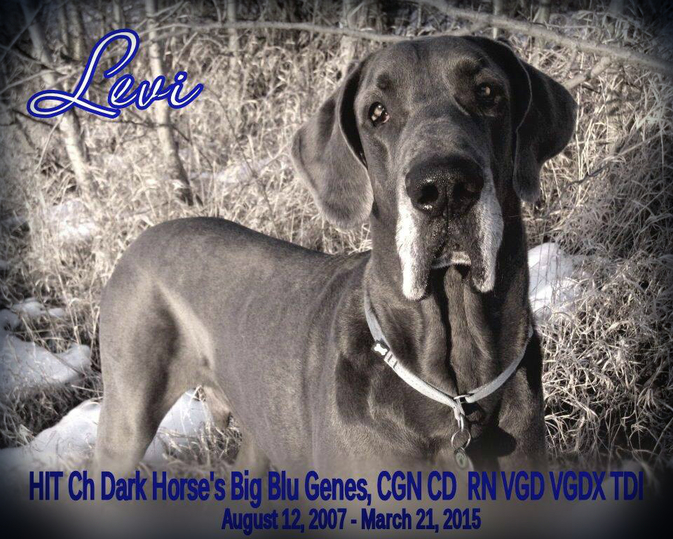 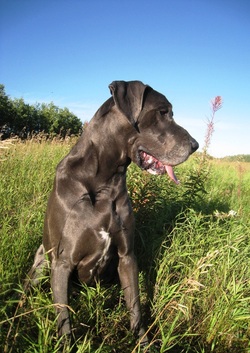 When I brought Levi home after a three year (and three long days) wait I really did not know what a journey I was about to begin.  Levi was magnificent.  He taught me about what it is to have your heart owned by a Great Dane.  Why they are like potato chips, and you can not have just one...

With Levi I began many new adventures.  When Levi turned six months old we stepped into the crazy world of Dog Shows. Levi was always patient and so happy as we learned the ropes with the unending support of his breeder, Marni Kueber of Dark Horse Danes, who has in many ways shown me what it means to be not just a good breeder but a great one.

Levi took longer to mature and get his conformation CH title than his siblings but he earned it in a huge way, by going BOW at the Great Dane Club of Canada's 2009  National Specialty out of an entry of close to sixty Great Danes.  Conformation was where Levi and I got to play.  Obedience was our chance to work together as a team and my team mate NEVER let me down.  Levi earned his CGN unprepared on a whim with no previous training, he was just a well behaved boy and I knew he could pass the test.
Levi earned his CD in four tries (three passing scores are needed) including one High in Class.
Levi's RN title came with the very special honor of a HIT at our Great Dane Club of Canada's 2011 Regional Specialty.

On that same day Levi was also awarded BOS Altered at the specialty in his own way of just having fun playing the stand for food game with mom.

When Levi was three we became a certified pet therapy team visiting people in extended care facilities.  We began visiting children at the Stollery Children's Hospital in Edmonton Alberta, bringing hugs and smiles to those who need them.

Levi taught me so much, he was my all and everything, the one that claimed my heart and has forever set the bar so high for all the dogs that may enter into my life.  He is the reason Great Danes will be my breed from now until forever...

More on Levi or the Danes of Dark Horse can be found at www.darkhorsedanes.com 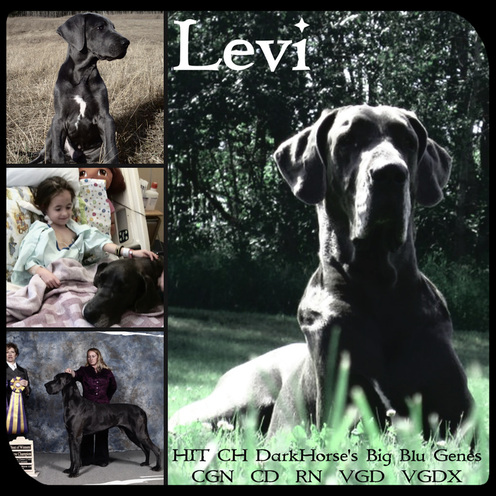 
Levi was one amazing dog
that meant so much, not just to me,
but to the many lives he had touched.

He really was "Some Dog"

Levi passed the testing to be registered as TDI
(Therapy Dog International) at a week shy of 7 years old.